Once An Abandoned Dog Now A Fire Fighter

It is quite tear-jerking to know when someone, a person or an animal, has been abandoned or neglected by his family. It angers humanity that there are some people very unwilling to provide care for their pets. But it is also inappropriate to judge quickly. Maybe there’s a hidden reason why it happened that way. The poor Roadie went from being a once abandoned and rescued dog to a rescue dog helping save people’s lives and property.

A German Shepherd mix was found roaming around the streets of Franklin in Indiana. Her name was Roadie.  She was all alone and was nowhere to go. She had no idea how to get home. So she stayed under the tree waiting for somebody to help her.

Finally, somebody noticed her and found a message in a bottle tied up to her collar. Then they called the director of Johnson County Animal Control, Michael Delp. He quickly rushed to Roadie’s location and brought her back to the shelter.

The message said Roadie was so well-loved but was let go by her dad, who lost his house and job due to the COVID-19 pandemic. Fortunately, she was in good health and good condition. What she needed most is a home and a family to take care of her.

Delp said he felt two emotions reading the note. First, if the letter is sincere, he would feel sorry for the one who abandoned Roadie. Second, if not, he would feel angry with someone for making an excuse for letting go of the poor dog. But it eventually turned out to be legit, and they made sure the individual will be able to get the help he needed. 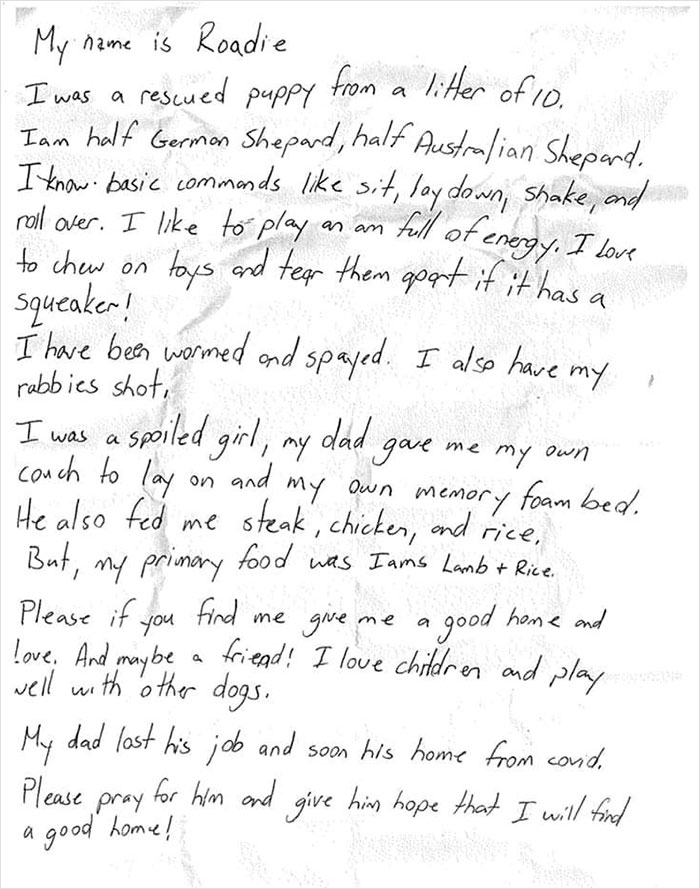 Roady gets a new name, dad, family, home, and career

Jeremy Pell, who is the chief of the White River Township Fire Department, had seen the local news about Roadie’s heartbreaking rejection last Saturday. He had been searching for a pup to be trained in the search and rescue operation for a few months already. Finally, he found Roadie as a perfect fit for it.

Pell headed to the shelter to check Roadie. Thank God she is now in good hands, with her new family, new career, and new life. Her new dad will take her to the office every day for her training. Pell prepared Roadie’s bed next to his office table. She obeys him, greets people there, and plays their occasional ball game. Check out brain games that can help improve your dog’s intelligence and behaviour.

The lucky rescue dog is still in her early stages of the training, but her dad hopes that they’ll be working together for the community one day. The dog is a smart, obedient, and sweet girl. She tries to do her job by asking her dad for guidance.

With her new life, family, and career, she has also been given a new name. Pell further explained why he decided to rename her Rosie Grace. He said that all dogs have middle names and that it’s by God’s grace she had been found safe and gotten all that she has now. She deserved it.