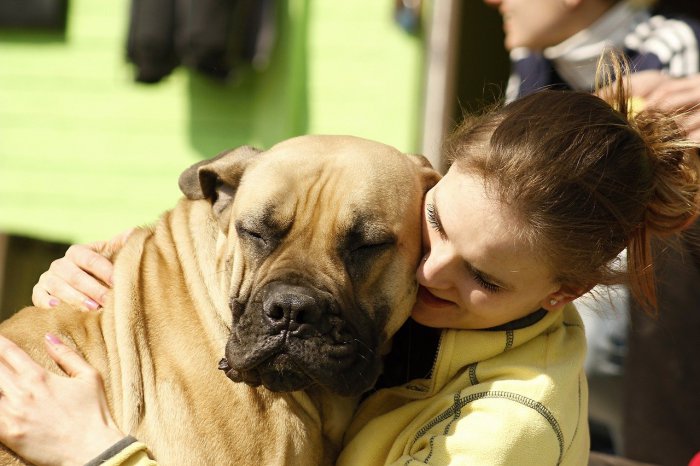 The seven-year-old Mastiff lived with his doting fur mom in Chula Vista, California, since he was just an adorable pup. When his owner passed away, he was left with no other family members to take him in, the Mastiff ended up in the local shelter.

He was eventually transferred to the Encinitas-based shelter called Rancho Coastal Humane Society, where he had been staying since December 2019. The shelter staff did their very best to find Charlie his next new home. However, plenty of people would immediately get intimidated by the canine’s massive size.

That was why despite him being a huge sweetheart and a friendly pup, not many adoption applications came for him in the past several months, making him the shelter’s longest resident. To help the sweet dog, CBS News 8, decided to cover his story and feature him in their news program.

When the story came out, plenty of applications came flooding in for Charlie, but one of them stood out. It was from Tim Yanitor, who was Charlie and his owner’s previous caretaker!

Tim was the neighbor of the pup’s lady owner back in Chula Vista. He eventually became her caretaker after he offered to build her a dog-dog-friendly fence. When the woman died, the animal control took the pooch away because he had no means to take care to care for a dog.

Tim never thought of meeting Charlie again until he heard of CBS News 8’s story from his current employer. Tim’s current employer had Mastiff too. When he learned that Charlie was alive, he immediately sent in his application to adopt him. Luckily, the shelter considered his application, and gave him a chance to welcome Charlie back to his home.

Needless to say, his reunion with the Mastiff was indeed heartwarming. Charlie was confused when he first met Tim, but he eventually recognized him and couldn’t contain his excitement to see an old friend.

Tim brought home the pup that same day, and he would never part with him again. Watch their adorable reunion here.